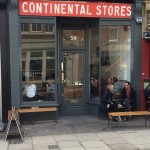 Run by two guys with coffee savvy, this tasteful hot spot near the back of the British Museum is kinda style-conscious, kinda trendy and kinda nice, characteristed by unpolished concrete floors, white walls that are a bit rough around the edges, a skylight and a generous supply of tables. Serves the increasingly ubiquitous (but delicious) Square Mile brand coffee and Viennoiserie and cakes from Sally Clarke and Villandry. Plus quality and knowing brunch and lunch options. Opened in October 2008. Around the corner in Malet St is a best-kept-secret sunken and sumptuous green garden owned by the University of London, officially not open to the general public but often open-gated and rather available 11am-3pm during the week. Other local landmarks include the Brunswick Centre (restored and reinvented 60s housing/retail development), lovely Russell Square (no longer the after-dark gay activities zone it once was), quintessentially Georgian and picture-perfect Bedford Square and the afore-mentioned big-name museum. In January 2014 Store St Espresso opened a second outlet, Continental Stores, not all that far away at 54 Tavistock Place, just around the corner from Gay’s the Word bookshop