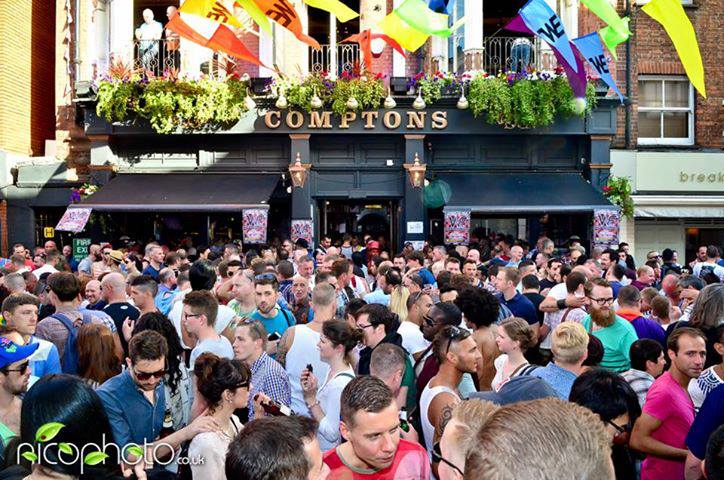 Cruisy, non-precious two-floor pub attracting non-perfumed guys, including leathermen in day wear, bikers and bears. Consistently busy, with men often spilling out onto the pavement [US = sidewalk], though purists pine for the look and feel of the bar as it was in the 1980s. Now a bit like the now-defunct and glorious Coleherne, but not quite as convincingly sleazy. In short, vanilla in the rough. Upstairs bar is decidedly more decorative and sit-down/relaxed, though the ground-floor pub does have a touch of the Phantom of the Opera about it. All drinks £2.50 on the normally packed Monday evenings, from 5pm — one of Soho’s better deals (sadly suspended on bank holiday Mondays). Great for standing with a drink outside, watching the catwalk in action (like a parade going in two directions simultaneously). Managed on and off since 1998 with old-fashioned care and enthusiasm by guv’nor Neil Hodgson, whose attention to detail includes a carpet woven for Comptons from a pattern used aboard the Titanic and sister ship the Olympic. Another feather in uniform-afficionado Hodgson’s cap is that he is the great nephew of the great playwright (and songwriter) Noël Coward, who allegedly frequented the establishment during the Second World War. The building, which dates from 1890 and was damaged during the Second World War, originally housed The Swiss Hotel, which then became The Swiss Tavern and, in 1986, Comptons. Nearby compatible watering holes include the King’s Arms and the less cruisy Duke of Wellington [see entries]. Leather Alert: monthly, friendly and cruisy all-ages Leather Social, started up by Simon Allen in early 2013, meets every first Sunday from 5pm until 10.30pm in the upstairs bar.